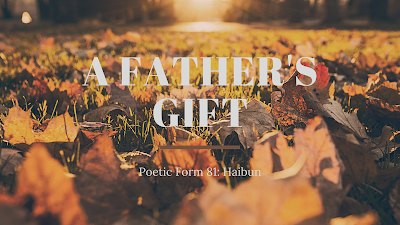 A man, shoulders soft from time, stands next to his child, who is now taller

than him. The man holds a box, a gift, for his son. Wooden, carved with

calligraphy of the past. The box is heavy in the man’s hands. His son lifts it

with ease. They smile; one is bright, the other scarred. In that moment one

can feel time shift in the son’s favor. The man’s chest falls and rises through

earthquakes of memories. The son opens the box to find,

The haibun form combines a prose poem with a haiku. The form was popularized by the 17th century Japanese poet Matsuo Basho. The prose poem and the haiku communicate with each other in some way. The prose poem usually sets a scene in an objective manner. The haiku follows the rules for haiku.
Posted by Jamey Boelhower at 6:04 PM